Balancing Forks - A Study in Center of Mass 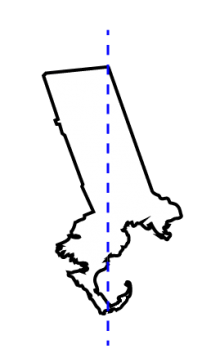 Fig. 1: Massachusetts hanging from the northeast corner of the state. The vertical dashed line must pass through the center of mass. 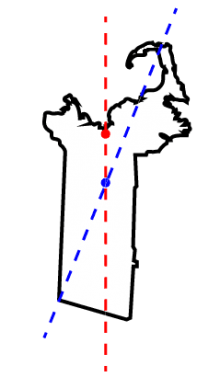 Fig. 2: Massachusetts hanging from Boston (the red dot). The blue dot indicates the center of Mass. 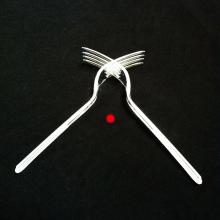 Fig. 3: Two plastic forks with their tines wedged together. The center of mass of the forks is located at the red dot. 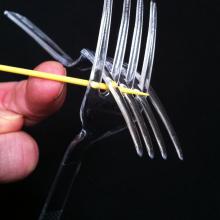 Fig. 4: Forks balanced on a finger tip, with the aid of a toothpick. Note how the toothpick is threaded through the upper slot of each fork. 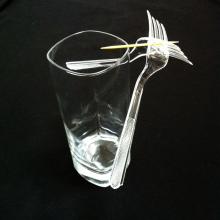 Fig. 5: Forks balanced on the rim of a glass. 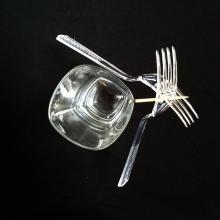 Fig. 6: Overhead view after the end of the toothpick has burned off. 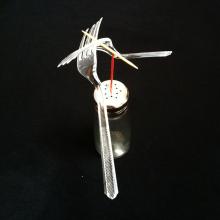 Take an irregularly-shaped object, like Massachusetts say, and hang it from the northeast corner of the state (figure 1). Half the weight of Massachusetts lies to the left of the vertical dashed blue line and half lies to the right of the line. (Otherwise, the state would tilt to a new position.) The center of mass must therefore be somewhere along this line.

Now hang the state from Boston (red dot in figure 2). Once again, half the weight of the state lies to the left of the red line and half to the right. The center of mass must be at the intersection of the red and blue lines (blue dot in figure 2). No matter how you hang the state, the vertical line down from the hook will always pass through the blue dot. This location is the center of Mass., just south of Worcester. In contrast, the Boston is the center of the universe, but only according to Bostonians. You can now balance the state of Massachusetts on a pencil by putting the point directly underneath Worcester.

The center of mass of an object doesn't necessarily have to be inside the object. Take two forks and wedge the tines together as in figure 3. The center of mass of the forks is located in between the two forks, at the red dot in figure 3. Since there is nothing at that location, it would be hard to balance the forks right at that point. There's nothing there for the support to hold up.

We can fix the situation by adding a toothpick that reaches back to the center of mass. Figure 3 shows the forks balanced on a fingertip with the aid of the toothpick.

Alternatively, we can rest the center of mass on the rim of a glass (figure 4). This makes for an improbable looking balance. Although the center of mass really is supported by the rim of the glass, it looks like the forks are balanced way out beyond the edge of the glass. It's hard to appreciate by eye that the handles of the forks are balancing in the other direction.

For an even more impressive display, you can balance the forks on top of another upright toothpick as in figure 7. Use round toothpicks rather than flat ones; it's hard to get the flat toothpicks lined up correctly. We used a salt shaker to hold the vertical toothpick, but any support will do. You can even tape the toothpick to the side of your glass.

Lara Jacobs at the TEDxEdmonton conference shows how far one can go in constructing a chain of center of mass balance points. Let her performance inspire you.


Video of Lara Jacobs performing her famous balance act, which has played at Cirque du Soleil.

Toothpicks and plastic forks are cheap enough to outfit an entire class. It's worth letting students try their hand at balancing forks on their own. Turn it into a game to see who can balance the most forks on the rim of a glass.