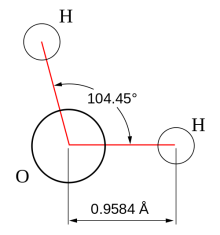 Fig. 1: Schematic of a water molecule showing distances and angles between atoms. Image made available by Booyabazooka at WikiMedia Commons through the CC-BY-SA license. 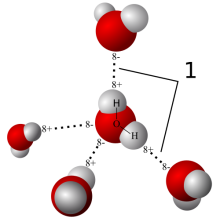 Fig. 2: Schematic of hydrogen bonds in water. Dipole attraction occurs between the oxygen atom of one molecule with a hydrogen atom of another molecule. Image made available by Qwerter at WikiMedia Commons through the CC-BY-SA license. 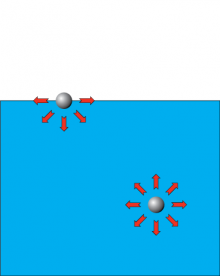 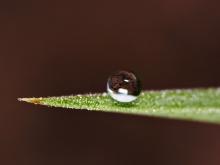 Fig. 4: Spherical dew drop on a leaf. Image made available by Michael Apel at WikiMedia Commons through the CC-BY-SA license. 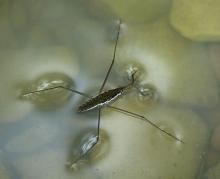 Fig. 5: Aquarius remigis, a.k.a. Water Strider, sits on the surface of a pond, supported by surface tension. Image available at WikiMedia Commons through the CC-BY-SA license.

Water is a common example of a cohesive liquid. In a water molecule, the two hydrogen atoms attach to the oxygen atom at an angle of about 105o (Figure 1). Some electrons in the molecule are not tightly bound to a single atom, and will tend to move back and forth between the different atoms. In general, electrons tend to spend more time near the larger oxygen atom, and less time near the hydrogen atoms. As a consequence, the oxygen end of the molecule is negatively charged on average, and the hydrogen ends are positively charged. When many water molecules come together in solution, the oxygen end of one molecule will be electrically attracted to the hydrogen end of another molecule, generating attractive cohesive forces. The molecules will tend to align according to the diagram in Figure 2.

Water is a strongly polar molecule (the charge difference between the negative end and the positive end is relatively large), but cohesive forces can also be generated in molecules that have no intrinsic polarity. Even molecules with a symmetric distribution of electrons can develop a small temporary charge difference from one end to the other as electrons move around in the molecule. When that happens, the neighboring molecules respond by polarizing themselves in the opposite direction, and the many molecules together can stabilize each other's polarization. This weaker form of attractive dipole force between molecules is called the "Van der Waals" force, and it produces smaller cohesion than in naturally polar molecules.

The terminology for cohesive forces is sometimes a little confusing and not always consistent. All intermolecular cohesive forces originate with the attraction of one dipole to another. In the case of molecules that are permanent dipoles, these are usually called "dipole-dipole" interactions. When the molecules under consideration contain hydrogen atoms (as in water), these forces are particularly strong and are sometimes called "hydrogen bonds". The weaker attractions between temporary dipoles are usually called "Van der Waals forces", or more specifically "Van der Waals dispersive forces" or "Van der Waals London forces". See further references below for more details.


Astronaut Chris Hadfield demonstrates what happens when you wring a wash cloth in zero gravity.

In the absence of other forces, surface tension will keep a liquid together in one single volume. Astronaut Chris Hadfield demonstrates this principle when he wrings out a wash cloth in zero gravity in the video above.

While floating in a gas, or sitting on top of a hydrophobic surface (like wax), surface tension will pull a small volume of water together into a spherical shape. A sphere provides the smallest surface area for a given volume, and thus minimizes the energy needed to resist surface tension forces. A dew drop on a waxy leaf demonstrates the effect in Figure 4.

Under the force of gravity, surface tension influences how far a liquid will stretch before it pinches off to form a drop, and is an important factor in determining the drop size. In the experiment described below, surface tension influences how much liquid will hold together on top of a penny before it breaks the surface and spills over the side.

Surface tension also holds the surface of the liquid together to help oppose the weight of objects that float on it. Some light-weight insects use this phenomenon to float on the surface of a pond even though they are heavier than water (Figure 5). 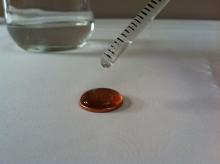 Fig. 6: Water held on a penny by surface tension. A graduated pipette made from a clear plastic straw is used to transfer the water to the penny.

How many water drops can dance on the head of a penny? One measure of surface tension is how much liquid will adhere to a specified surface before it spills over the side. For this experiment you'll need a penny and a pipette graduated in units of 0.1 milliliter or smaller.

Take a penny and put it on a level surface. Fill a graduated pipette with water and use it to transfer drop by drop to the top of the penny. Place the drops slowly and carefully in the center of the penny. As more and more water is added, the volume of water will bulge upward forming a rounded surface (Figure 6). Surface tension holds the water in place. Eventually, the penny will hold no more, and the water will spill over the side. Record how much water you transferred from the pipette. Keep track of all the results in the class and take an average.

Repeat the experiment with other liquids.

It may be tempting to use an ungraduated pipette to do this experiment and just count the number of drops that the penny will hold, but this technique would mislead you. Drop size varies depending on surface tension (as well as specific gravity, viscosity and the vessel from which it is poured). When I first did this experiment, I was able to put 17 drops of water on the penny, whether or not the water had soap in it. However, the soapy drops were noticeably smaller.

If you can't get hold of a graduated pipette, you can make do with a narrow clear plastic straw. Draw gradation marks on the side of the straw every two millimeters with a permanent pen (Figure 6). For a 6 mm diameter straw, a two-millimeter length corresponds to a volume of about 0.05 milliliter, or about one standard drop. Lower the straw into a glass of water and put your finger over the top as you withdraw the straw. Water will remain in the straw. Hold the straw over the penny and gently squeeze the sides of the straw to force out water one drop at a time.

Jim Clark at ChemGuide has posted particulary lucid explanations of Van der Waals forces and hydrogen bonds with some wonderfully instructive diagrams. I highly recommend them for anyone looking for a little more detail.

Surface tensions for a large number of commercially available liquids can be found at http://www.surface-tension.de/.