Video showing a frog levitating in a magnetic field. This research won the 2000 Ig Novel prize in physics.

It's hard to levitate a frog without special equipment, but there are other objects you can find at home or in the classsroom that are easy to levitate.

how does a frog levitate?

It turns out that many materials are 'diamagnetic', meaning that they are repelled by a magnet (in contrast to 'magnetic' materials, which are attracted by a magnet). Although diamagnetism is fairly common, it is a very weak effect, much weaker than the attractive forces of magnetic materials such as iron. For that reason, diamagnetism is rarely ever noticed.

One of the most common diamagnetic materials is water. It's diamagnetism is extremely weak, but it can be observed in very low friction environments. The wonderful video below by Nurdrage shows the repulsive force between water and a strong neodymium magnet.

Nurdrage demonstrating the diamagnetic properties of water and pyrolitic carbon.

Since biological materials contain water, they are subject to diamagnetic repulsion. In 1997, Andre Geim and collaborators demonstrated diamagnetic levitation of a frog (which has a particularly high water content) using the repulsive force from a very strong magnet to counteract the force of gravity.

In order to generate a strong enough repulsive force to balance the weight of the frog, Geim's group had to use the extremely high magnetic field generated by a Bitter electromagnet at the Nijmegen High Field Magnet Laboratory in the Netherlands. A Bitter electromagnet, invented by Francis Bitter in 1933, uses conducting plates (instead of the more commonly used conducting wire) to carry the high electric currents and withstand the tremendous heating and stresses associated with high fields. The magnet used in the frog video above generated a magetic field of roughly 16 Teslas (about 10,000 times stronger than the surface field of a typical refrigerator magnet). At that value, the diamagnetic repulsion is just enough to balance the weight of the frog.

the microscopic origin of diamagnetism (notes for geeks)

All materials exhibit diamagnetic tendencies to some extent, which result from the motion of electrons inside atoms. When the diamagnetic material is placed in an external magnetic field, the magnetic forces on the moving electrons cause the atoms to precess, or rotate, around the direction of the external magnetic field. These forces are called Lorentz forces, and the precession is called Larmor precession, named after Joseph Larmor. The Larmor precession of the atom is similar to the precession of a spinning top. A top will wobble around a vertical axis shortly before it falls over, rotating around the direction of the (vertical) gravitational field. 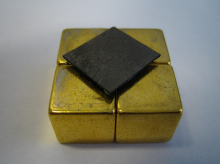 It's nearly impossible to produce high enough field strength at home to levitate water (unless you have a really amazing shop in your garage). However, a few other materials are more strongly diamagnetic than water and can be used to perform levitation at home. Table 1 shows the magnetic susceptibility (a measure of the strength of the material's magnetic field) for a number of common diamagnetic materials. The susceptibilities of diamagnetic materials are all negative, indicating they generate a magnetic field opposite the direction of the external field.

Graphite (pencil lead) is one of the most common diamagnetic solids. With strong enough magnets, it is possible to diamagnetically repel graphite against the force of gravity, so that the graphite levitates. The video below gives a demonstration of the diamagnetic effects of pencil leads, including levitation over an array of neodymium magnets. In the video, the magnets are arranged in a checkerboard pattern: the red magnets have their north poles pointing up and the silver magnets have their south poles pointing up. If only one magnet were used, the pencil lead would be repelled, but balance would be unstable. The pencil lead would quickly slide off to one side. By using a checkerboard pattern, we create a stable arrangement of magnetic field. The field is strongest in the middle of each face of a magnet. The field is weakest at the edges where two magnets are touching; at that location, the fields from the two magnets partially cancel.5 This arrangement creates a region of weak field at the boundaries between magnets, and the pencil lead settles into this region of weak field, flanked by regions of stronger field that keep it in place.

When setting the pencil lead on top of the magnets, make sure you lay the pencil lead along the join line between magnets. If you push it too far to one side or the other, it may fall off.

A slightly stronger effect can be seen (figure 1) with pyrolytic carbon (sometimes called pyrolytic graphite), which is available from some specialty shops. The folks at http://sci-toys.com have written up a detailed description of levitation techniques with pyrolitic carbon at http://sci-toys.com/scitoys/scitoys/magnets/pyrolytic_graphite.html. They also sell pyrolytic carbon in their store. Other suppliers are provided in the equipment list at the top of this page.

Video showing several tricks with diamagnetic pencil leads, including levitation above an array of neodymium magnets.

levitate a magnet using diamagnets
Another levitation trick involves using diamagnets to stabilize the attractive pull between two strong magnets. In principle, one could levitate a small magnet by holding a large magnet above it at precisely the right distance so that the attractive magnetic force exactly cancels the pull of gravity. Unfortunately, the arrangement is not stable. If the small magnet moves downward even a tiny amount, the magnetic attraction decreases and gravity takes over, pulling the magnet farther down. The magnet continues to accelerate downward until it eventually hits the ground. If the small magnet moves up, the magnetic attraction overwhelms gravity and pulls the magnet further upwards until it hits the large magnet.

The system can be stabilized using pieces of diamagnetic material above and below the small magnet. When the magnet strays too far in one direction or the other, it moves close to the diamagnet, which repels it back in the direction it came from. The folks at scitoys have written detailed instructions for constructing the levitation device using homemade Bismuth disks. A video of a similar device is available at https://www.youtube.com/watch?v=jOaBnJpIRzM. A technical paper6 on the subject was written by (you guessed it) Andre Geim etal.