Static electricity is common on cold dry days. Kids at the playground go down the slide with their hair standing on end. Clothes come out of the dryer with that pesky "static cling"; socks have to be peeled off of the sheets. You walk across a vinyl floor in your wool socks and get an electric shock when you touch the doorknob. 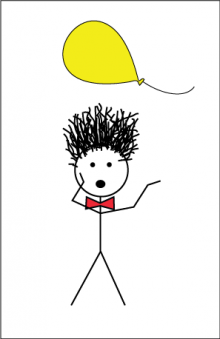 Fig. 1: Rubbing a balloon on hair transfers negative electrons from the hair to the balloon. As the balloon is removed, it pulls on the hair with an attractive electric force. 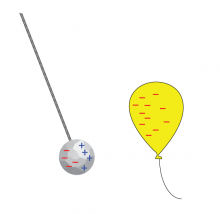 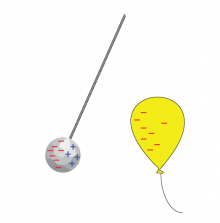 activity - balloon on the ceiling
On a dry day, blow up a rubber balloon and rub it back and forth over your hair. You might be able to hear the crackle of static electricity as you do so. After about 10  seconds of rubbing, pull the balloon away from your hair. Your hair should be pulled up along with the balloon (figure 1). Take the side of the balloon that was rubbed and press it against a plasterboard ceiling. (Other ceiling materials may also work.) If the atmospheric humidity is low enough, the balloon should stick to the ceiling.

how does it work

Under some circumstances, it is possible for neutral atoms or molecules, which normally contain equal numbers of positive and negative charges (protons and electrons), to acquire extra electrons and turn into negative ions, or to give up electrons and turn into positive ions. Some materials have a stronger attraction to electrons than other materials. When two materials with dissimilar attraction to electrons come in contact, electrons may be transferred from one material to another, thereby making one material positively charged and the other negatively charged. This electron transfer is usually facilitated by rubbing. In essence, electrons are rubbed off of one material, and stick to the other.

In chemistry the measure of how easily an atom or molecule acquires an extra electron is related to "electron affinity".1 Materials are ordered in the "triboelectric series" (from the Greek $\tau\rho\iota\beta\omega\sigma$ "rubbing") from those that have the strongest electron affinity at the bottom to those that have the weakest electron affinity at the top. The first triboelectric list of materials was published by  the Swedish Johan Carl Wilck in 1757,2 who not coincidentally lived in a cold dry climate. A modern version is shown at the right.

Rubbing together two materials that are close together in the series transfers little or no charge, while rubbing together materials that are far apart in the sequence transfers a large charge. When a rubber balloon is rubbed against human hair, electrons are transferred from the hair to the rubber, giving the balloon a net negative charge, and leaving the hair with a net positive charge. As the balloon is pulled away, the opposite charge on the hair causes it to be attracted to the balloon. Even after the balloon is removed, the positive charge on the individual hairs causes each hair to repel the other hairs, and can result in some hairs standing on end, pushed up by the other hairs.

activity - pith ball
The "pith ball" is a device that uses a metal foil on a light weight core to show electrostatic attraction and repulsion. You can easily make one yourself by wrapping a styrofoam ball in aluminum foil and tying a thread on the ball. Attach the other end of the thread to a convienient overhang, perhaps on a ruler hanging over the edge of a table. When you bring a charged balloon near the pith ball, the electrons run to the far side of the ball, leaving behind the remaining positive parts of the aluminum atoms. The resulting charge separation leads to an attractive force. You should see the ball swing towards the balloon (figure 2).

Other pairs of materials can produce even larger static charges. To get the biggest charge transfers, use a material at the top of the triboelectric list (like a rabbit) with one at the bottom of the list (like a PVC pipe).


This video by Steve Spangler shows a clever application of static electric attraction to make a match stick spin on top of a nickel.

Humidity reduces the build up and retention of static charges. On humid days, most materials will absorb a certain amount of water. Some materials will even develop a thin layer of water across the surface. Since water is conductive, the presence of water can reduce both surface resistivity and volume resistivity, allowing electrons to travel more freely and quickly dissipate any static charge across the surface or into the bulk of the material.

If a static charge is produced on an object, water vapor in the air (which includes H+ and OH- ions), can be attracted to and neutralize the static charge.

Although the triboelectric series suggests that a material should get a certain charge when rubbed with another material, when we test that hypothesis by bringing it near a pith ball with that same charge, the material and the pith ball attract instead of repel. Why is that?
There are three possible reasons for seeing an attraction where you expect a repulsion. 1) There may not be enough charge on the pith ball to overcome the attractive force due to charge separation. 2) Oil or dirt on the surface of any of the materials can often change the result. Make sure everything is clean when you do your tests. 3) The published series may be wrong. It's very hard to get the order correct for materials with very similar electron affinities. Published lists often disagree about the order of nearby materials. See further resources below.

What causes the electric shock when I touch a doorknob?
When you walk over a vinyl floor (or any other electronegative material) in your socks, electrons are transferred from your socks to the floor, leaving your socks with a net positive charge. Since your socks are touching your feet, electrons from your body will flow onto the socks to make up the difference. You will be left with a net positive charge that can sometimes correspond to very high voltage (up to 35,000 Volts).3 When you subsequently touch a metal conductor such as a doorknob, electrons from the metal jump to your hand to neutralize your static charge. Fortunately, this discharge involves very little current, not enough to do damage to the human body, though it can reek havoc with sensitive electronics.

If there is time in class, it's worthwhile to let students construct their own table of triboelectric materials. Start with materials far apart on the triboelectric series to get a large transfer of charge. Human hair and PVC pipe are good materials to start with. Then transfer electrons from the PVC pipe to the pith ball to give the pith ball a known negative charge. Now test other materials against that known charge, for example:

Make sure students keep detailed notes on the results of their tests, and the conclusions they make.

Some tips for good measurements:

Not all triboelectric series lists are the same. A great many have been published since Johan Wilck's first version in 1757. They all show the same general trends but sometimes differ on the order of nearby materials. Here's a small sample for reference: