Measuring the Density of Pennies

Special Credit: I was inspired to write this lesson following a talk on the same subject by Dr. Duane Deardoff (U. of North Carolina) at the 2013 summer conference of the American Association of Physics Teachers. All of the brilliant insights are his, and any clumsy mistakes are mine.

What must you measure in order to determine the density of a penny?

Since the density is the amount of mass per volume, and the volume of a penny can be determined (approximately) from the thickness and diameter, it follows that measurements of the mass, the thickness and the diameter of the penny should be enough to calculate the density. The volume $V$ of a disk is just the thickness times the area of a circle: \begin{equation}V = t\times{\pi D^2\over 4}\end{equation} where $t$ is the thickness and $D$ is the diameter. The density $\rho$ is then \begin{equation}\rho = {m\over V} = {4m\over t\pi D^2}\end{equation} where $m$ is the mass of the penny. This assumes that the penny is a uniform cylinder of metal, an assumption we'll come back to at the end of the lesson in "statistical and systematic errors", below. 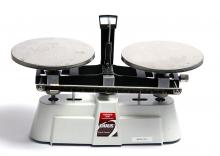 Fig. 1: Simple balance scales, accurate to 0.1 grams. Image made available by Lilly_M at Wikimedia Commons under the CC-BY-SA 3.0 license.

Fig. 3: Micrometer with parts labeled. Image made available by Three-quarter-ten at Wikimedia Commons under the CC-BY-SA 3.0 license.

Fig. 4: A sample of 100 thickness measurements of new pennies using a crude micrometer. The average thickness for this sample is 1.42mm and the RMS of the distribution is 0.07mm.

Mass can be measured with a good balance scale (figure 1) that measures to 0.1g, or better yet, a digital jeweler's scale, which measures to 1-10 milligrams. A penny typically weighs between 2.4 and 3.2 grams, depending on the year of manufacture and wear.

Of the three measurements (mass, diameter and thickness), which is the most critical for calculating the density?

Clearly, a ruler is not the best tool for trying to measure the thickness of a penny. It's not precise enough. A better tool might be a Vernier caliper (figure 2) or a micrometer (figure 3). These devices can easily measure to a precision of 0.05 mm or better.

How do you determine the uncertainty of a measurement?

All measurements are subject to errors. Perhaps there's a limit to how precisely one can read the marks on a micrometer, or maybe there are fluctuations in the readout of a balance scale that depend on temperature and humidity, or perhaps the result of an entire experiment depends on the phase of the moon (not usually, but see this article on the effects of lunar and solar tides on a particle beam experiment at CERN).

You might make a reasonable estimate of uncertainty by looking at the precision of your measuring tool. The smallest marks on your ruler are probably a millimeter apart, and you might suppose that you can judge a measurement to half that length by eye (which is how we got to a ruler uncertainty of 0.5mm above). The smallest increments on a micrometer scale probably correspond to a much smaller distance, and you might reasonably assume that the measurement uncertainty is correspondingly smaller.

However, there is an important distinction between "precision" and "accuracy". Your micrometer may have a scale marked in thousandths of a millimeter (high precision), but that does not mean it is correct to a thousandth of a millimeter (highly accurate). In the end, the uncertainty depends not only on your tool, but also on how you read it, and maybe many other factors in the environment. To get a better estimate of the uncertainties in measurements, you might repeat a lot of identical measurements, and plot the distribution of results. Figure 4 shows a plot of the measured thickness of many new pennies (which haven't been worn appreciably and should all be the same thickness) using a crude micrometer. See our lesson on Homemade Micrometer to see how we built the micrometer.

Now take the difference between each measurement and the average; this is the "deviation", $\Delta t_i=t_i - \overline t$. Some measurements will be too high, leading to positive deviations, and some measurements will be too low, leading to negative deviations. In order to handle the positive and negative deviations on an equal footing, we'll use the square of each deviation. Then, in order to estimate a typical square deviation, we take the average (or "mean") of all the square deviations. This average is usually known as the "variance" of a distribution. Finally, since we want an estimate of a typical deviation, not an estimate of a typical squared deviation, we'll take the square root of the whole thing. Reading the formula from the outside in, this calculation gives the "root mean square deviation", usually represented by the Greek letter $\sigma$: \begin{equation}\sigma_t = \sqrt{\sum_{i=1}^n {\Delta t_i^2\over n}} = \sqrt{\sum_{i=1}^n {(t_i-\overline t)^2\over n}}\end{equation}

For the distribution shown in figure 4, the RMS is 0.07mm.

propagation of errors (note for geeks)

Students who are comfortable with this type of calculation may wish to calculate the RMS values of the individual mass, diameter and thickness distributions, and use those values to predict the RMS of the density distribution following the equation above. Comparison of the prediction with the actual RMS density calculated from the distribution of density measurements tells you how accurate your predition is. (But see the discussion under "questions to ponder" regarding correlated errors.)

Fig. 5: Plot of measured masses for a sample of 50 pennies. 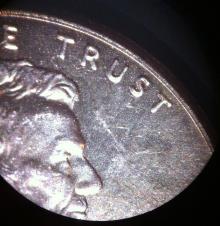 Fig. 7: Magnified view of a Lincoln head penny, showing the relief. The penny is about 1.5mm thick at the high points, and about 1.1mm thick at the low points.

A "statistical error" is a random error that is not correlated from one measurement to the next. An error of this type is just as likely to be too high as it is to be too low. The effect of statistical errors can be reduced by taking the average of a large sample of measurements — the random statistical errors tend to cancel out in the average. In contrast, a systematic error is generally an error in assumption or technique (an error in the "system"), which may be common to many measurements. If a systematic error affects all measurements in the same way, no amount of data, and no averaging can alleviate the bias.

In this lesson there are two good opportunities to study systematic errors. One involves how pennies are manufactured, and the other involves our technique for measuring thickness.

First of all, attentive students may notice that the mass measurements for pennies tend to cluster around two separate values. Some pennies weigh in around 2.5 grams, while others are closer to 3.1 grams (figure 5). There aren't many measurements in between. The reason for this odd behavior is that in 1982 the U.S. penny composition changed from 95% copper and 5% zinc to 97.5% zinc and 2.5% copper.3 Figure 6 shows a scatterplot of mass versus year, demonstrating the change. Since we're trying to measure the density of pennies, it's important to pay attention to the year the pennies were minted, and to keep these two populations separate. Pennies minted prior to 1982 should have a density almost the same as pure copper (8.96 g/cm3) while pennies minted after 1982 should have a density almost the same as pure zinc (7.14 g/cm3). If we assumed we were trying to measure the density of pure copper pennies, then including pennies minted after 1982 in the measurements would amount to a systematic error.

It's not easy. If you make a lot of IDENTICAL measurements, and get different results, you can figure that the variation has something to do with the measurement process. For example, if you measure the same penny many times with the same micrometer, but get different results, you might assume the variation is due to the measurement process. Maybe you tighten the micrometer screw a little tighter sometimes, maybe you measure at slightly different points on the surface of the penny, maybe the micrometer is uneven and measures differently on different sides (see figure 4). Alternatively, if you happen to know that the maximum width of a penny when brand new is 1.52mm (but that pennies can be worn thin over time) then even if you measure many different pennies, you might figure that measurement results larger than 1.52mm indicate the size of errors due to measurement, while results less than 1.52mm are probably due to a combination of measurement error and wear.

Good question. Some folks have suggested measuring the volume of a penny by measuring how much water it displaces. This sounds like a clever idea — it measures the true volume rather than an estimated volume assuming the penny is a uniform cylinder — but it might be hard to measure precisely. The best way to do this would probably be to put many pennies in a small container of water (perhaps a graduated cylinder), and record how much the water level rises. We want to get the surface of the water to rise as much as possible when the pennies go in. Calculate the change in volume (water plus pennies compared to just water) and divide by the number of pennies to get the average volume of a single penny.

It makes sense to start the lesson by asking students what parameters they need to measure in order to figure out the density of a penny. This question leads them quickly through the formula for the volume of a cylinder to identify the three basic measurements involved (mass, diameter and thickness).

I also like to ask how students think they should make the measurements. I let one student measure the diameter and thickness of a penny using a ruler, and then ask the class how accurate the measurements are likely to be. Then I ask which measurement is the most critical in calculating the density. This questions starts the conversation about measurement error and gets students thinking about how measurement errors could affect the final result. Also, it makes them realize a ruler is not a very good tool for measuring the thickness of a penny. We then switch to a Vernier caliper or a micrometer.

Much of the class is well spent just letting students record the date, mass, diameter and thickness of a sample of pennies (20 pennies is usually enough), so that we have enough data to make some interesting plots. Let students enter data directly into a spreadsheet or use the attached worksheet. Use a spreadsheet program (Excel or Google Spreadsheets) to also calculate the volume and density of each penny. Using the spreadsheet program, we then make the following plots. (Google spreadsheets is good for this since it has a built-in histogram option that works on all computers.)

Students who are familiar with calculus can also be asked to calculate sample RMS deviations from their mass, diameter and thickness histograms, in order to predict what the sample RMS should be for the final density histogram. See the section on "propagation of errors" for this formula.

The U.S. mint has a description of how coins are made at http://www.usmint.gov/faqs/circulating_coins/index.cfm?action=coins .

The U.S. mint specifications for coins currently in production can be found at http://www.usmint.gov/about_the_mint/?action=coin_specifications .