Video by HedgehogTH of a Neodymium magnet falling (very slowly) through a copper pipe.

Fig. 1: Magnetic field lines around a loop of wire. Current is flowing clockwise. The ends of the wires point out of the page. 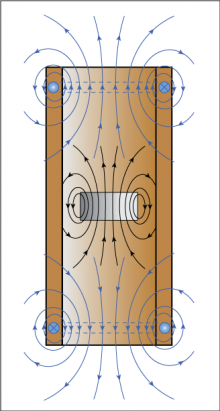 Fig. 2: A disk magnet falling inside a copper pipe. The magnetic field lines of the magnet are in black (north pole up). Representative induced currents around the perimeter of the pipe are shown in blue with blue field lines. 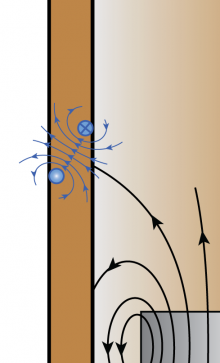 Fig. 3: Detail of a magnet falling in a thick pipe, showing the different induced currents towards the inner and outer walls of the pipe.

This demonstration has been popular for many years and has been posted many places, but the video above is one of the very best. A strong Neodymium magnet is dropped through the center of a conducting pipe. Instead of falling through at the normal acceleration, it floats downward at a snail's pace. There is no sleight of hand involved. This marvelous effect is a consequence of the laws of electromagnetism.

WARNING: Neodymium magnets are very strong and must be kept away from electonics chips and credit cards. They are also brittle and can shatter when dropped.

1) The first, known as "Faraday's Law of Induction", tells us that a changing magnetic field creates an electric field (and consequently an electric current) in the conductor. This is the principle behind the operation of electric generators, which use moving magnets (or moving coils) to generate electric current. In this demonstration, the falling magnet changes the magnetic field in the vicinity of the conductor as it falls past, creating electric currents in the pipe. These currents are sometimes called "eddy currents", named after the analogous currents in water that sometimes cause persistent vortices.

2) The second, known as "Ampere's Law", tells us that electric currents produce magnetic fields. This law explains how an electromagnet works. When an electric current is sent through a wire coil, it turns the coil into a magnet. Figure 1 shows the magnetic field lines around a simple loop of wire that is carrying a current. For more information on magnetic fields and field lines, please see our lesson on Iron and Magnets. For more examples of field lines around current-carrying wires, see our lesson on Basic Electromagnets.

Figure 2 shows a diagram of representative currents and fields in the copper pipe. The field lines of the neodymium magnet are shown in black. The north pole is assumed to be pointing up (the field lines point up). As the magnet falls through the pipe, current is induced underneath it, which runs around the perimeter of the pipe in the clockwise direction as viewed from above.1  The dashed blue lines show a representative current loop going into the page on the left side (indicated by the blue circle with the cross) and coming out of the page on the right side (indicated by the blue circle with a white dot in the center). The field produced by this current loop is indicated by the blue lines with arrows. It looks a lot like the field from the disk magnet, except it is upside-down; the falling magnet has its south pole facing down, while the current loop has its south pole facing up. A similar effect occurs above the falling magnet. In this case, current is generated in the opposite direction (counter-clockwise from above) and produces a field with the south pole facing down.

The pattern of induced currents is not quite as simple as we may have led you to believe. To see the pattern of currents in more detail, let's look at a small region of the pipe above the disk magnet in figure 3. At this instant, the magnetic field from the disk magnet is pointing up and to the left as it enters the conductor. The disk magnet is falling away however, so the current induced in the pipe tries to augment the field from the disk magnet to prevent it from diminishing. In order to produce a field in the correct direction, there must be a current going into the page on the high inside wall of the pipe, and a current coming out of the page on the low outside wall of the pipe, as shown in the figure. In between those two currents, each of which goes all the way around the pipe, the field is in the correct direction. Similar currents must be induced for each portion of the pipe.

Note: When trying these demonstrations with magnets and conductors, make sure the conductor itself is not magnetic. Steel or iron will automatically magnetize to attract the magnet, and will overwhelm any repulsive effects due to Lenz's law.

The demonstration in the video above is not terribly cheap. The Neodymium magnets used in the video may cost \$20 to \$50, and at the time of this writing, copper sells for about \$7 per kg,2 which puts about \$30 worth of copper in what I'm guessing is a 4kg pipe. A fat copper pipe of the type shown is also hard to find. Most standard plumbing uses much thinner pipe.

Thin-wall copper plumbing pipe from the local hardware store can still be used with smaller magnets. Get yourself a long piece of pipe (at least a couple of feet long) so that it takes a long time for the magnet to fall through. Choose a magnet with a diameter just small enough so that it doesn't drag against the wall of the pipe as it falls. It's especially magical to hold onto the copper pipe while the magnet falls through. You can feel the electromagnetic force on the copper pipe trying to pull it downward.

You can also demonstrate the Lenz effect with a copper or aluminum plate. Drop a strong magnet onto a thick metal plate and you will see the magnet slow down just before it hits. For a small magnet the effect is noticeable only a millimeter or two above the plate, but for large magnets the effect can be quite dramatic. See http://www.youtube.com/watch?v=qtcVtmkDXLk for a nice example.

For a less expensive demonstration that's good for the whole class to see, try rolling a small cylindrical magnet down a metal incline. A piece of aluminum angle bracket works well.